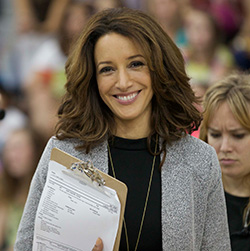 This Sunday August 9th premieres on NBC 4 Los Angeles and NBC 7 San Diego ‘Full Out’, the film starring Ana Golja, Jennifer Beals and Sarah Fisher based on the true life story of California gymnast Ariana Berlin whose olympic aspirations were crushed after a car accident.
We recently had the chance to talk to ‘Full Out’ director Sean Cisterna about the film and the cast.

J-B.com: What inspired you or led you to make this movie and how did it come to your attention?
Our exec producer Jeff Deverett brought Ariana Berlin’s story to my attention at the same time as our writer, Willem Wennekers. When Jeff told us Ariana Berlin’s story, he had two grown men tearing up in a coffee shop. It’s so rare that a compelling story can be told in just a short synopsis.

J-B.com: You have worked the full gamut of writing, producing, directing and acting. In fact you produced, directed and acted in Full Out. Which genre gives you the most satisfaction and why? And can you tell us about your role in Full Out?

I directed and co-produced Full Out. I love filmmaking in general because it’s such a synthesis of so many disciplines. Producing is exciting because it involves building a project from the ground up and utilizing business skills, and directing is such a rush because of the high-intensity creative decisions that have to be made and communicated to actors and all the departments on a set. Filmmaking is a rush. And, I’m certainly not an actor. I’m just a sclub who crosses the frame at one point just so I could point myself out to my kids when the movie comes out.

J-B.com: What would you like the audience to feel or take away after seeing this movie?

It’s a movie about dealing with adversity and giving everything you’ve got. That’s why Full Out is such an appropriate title. Not only is it the name of a difficult gymnastics move meaning two flips with a full twist, but it also refers to doing something with maximum effort…and that’s just what Ariana Berlin does with everything she sets her sights on.

J-B.com: How did you get Jennifer Beals on board?, did she have to read for the part of Coach Val, or did you know her work and seek her for the part ?

Jennifer was recommended highly after our US casting director read the script and did some research on the actual Coach Val Kondos Field. Jennifer did not need to read for the part. She’s an icon. Someone with that resume and skillset is a natural leader.

J-B.com: How would you describe Jennifer as an actress and how was working with her on set?

Jennifer is a professional. She comes to set incredibly prepared. Weeks before filming, she visited Coach Val at the UCLA Women’s Gymnastics Centre and spent a lot of time with them, taking notes, making observations. Her research definitely came into play in the film. When gymnasts who have studied under Coach Val come up to me, they can’t help but comment how accurate Jennifer’s portrayal of Val is.

J-B.com: In behind the scenes photos, Coach Val was present for at least some of the filming. How did she and Jennifer work together?

That’s something I’d try not to ruin with me popping my head in. I’d sometimes look over and see Jennifer sitting in the gymnastics club with Val talking and laughing. Those were such beautiful moments for me to witness. I’d love to know what they were talking about, but I didn’t want to interrupt them.

J-B.com: The atmosphere on set seemed very lively and fun from the pictures and videos. Can you tell us any behind the scenes anecdote?

This was probably the most fun a cast and crew has ever had in the history of motion pictures. The moment your production rents a gymnastics club, all your adult cast and crew turn into little kids again. Every time the assistant director announced a break, cast and crew would be hopping on trampolines and leaping into foam pits. You can’t help but bond closely with the people you’re working with when your buried together under a pile of foam blocks.

J-B.com: Ariana Berlin was a stunt double for Ana. How was the interaction between Ariana and Ana Golja whom she portrays?

They’re twins in many respects. They both have the same drive and ambition to succeed. They’re both incredibly agile and fantastic dancers. And they both possess wisdom beyond their years. I learned a lot from the women on this production.

J-B.com: To play an athlete takes a lot of skills, did Ana have any gymnastic experience before this role?

Ana had some gymnastics skill, but in the months leading into production, those skills increased tenfold. We’d go watch Ana train at the gym, and she’d be leaping on balance beams and jumping on uneven bars. I was lucky enough to watch her land an aerial – the look of shock on her face after she landed was magical. She was so happy with herself and rightly so. She worked incredibly hard for this role.

J-B.com: Describe Jennifer, Ana, Coach Val, and Ariana each in one word.

J-B.com: What was the hardest part on filming Full Out? And how long did it take to film Full Out?

It took approximately 20 days to film Full Out. The hardest part, by far, was filming the gymnastics sequences with 300 extras. We had such limited time with the extras, so we rented 3 cameras and tried to maximize every shot so that it not only featured the crowd, but was dynamic and exciting to watch. However, for the more complicated portions of the routine, we’d swap in professional gymnasts for our actors, and had to repeat the same camera moves so that the editing of the sequence is seamless. If it sounds confusing, it was! But I’m thrilled with the way it turned out.

J-B.com: Full Out premieres Sunday 9th on NBC San Diego and Los Angeles, when can we expect to see the film nationwide and other countries as well? Will the film be shown at any film festival and eventually released on dvd ?

The film premieres on NBC in California, and on The Family Channel in September all across Canada. European dates will be made available as we get them, but plans are certainly underway. We have partnered with DHX Media to ensure the film is released in as many countries as possible.

J-B.com: If you had to summarize the film in one line what would it be?

Full Out is the story of a young gymnast who’s Olympic aspirations are crushed after a debilitating accident.

J-B.com: What films have been the most inspiring or influential to you and why?

The high bar will always be ET. It’s the first movie I saw as a kid. I came out of that theatre a sobbing mess, having first realized the power of cinema to affect people’s emotions.

J-B.com: What’s your next project?

I’m going to be making a film called Kiss and Cry, a theatrical romantic teen drama. It’s a more mature film than Full Out, I’d say, but there are similar themes. The title of the film also has two meanings.