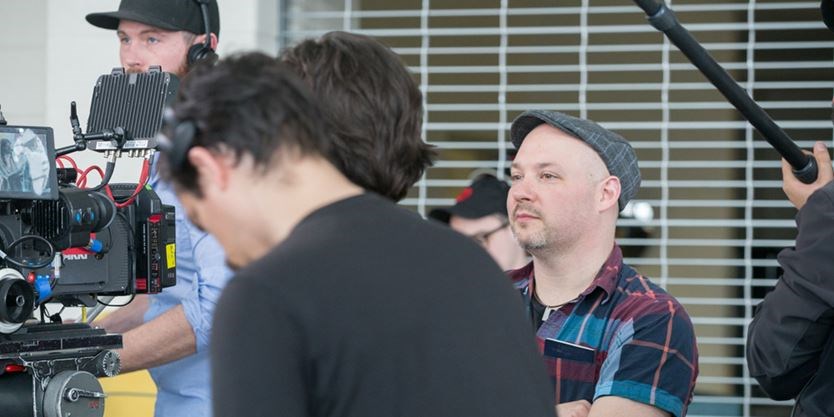 From The Caledon Enterprise:

Sean Cisterna has come a long way since his days as a film student at Robert F. Hall Catholic Secondary School in Caledon East.

After graduating from York University’s film and video program, he dove into a career as a director.

His latest feature film, Kiss and Cry, already made a name for itself following a successful theatrical release in February where it was the number one Canadian film at the box office — and this weekend (April 7), it will make its network debut on the Family Channel at 8 p.m. ET/PT.

It has already sold out viewings at film festivals across Canada and Cisterna is spending much of his time this spring promoting the movie in locations as far away as Shanghai and Dublin.

The movie, released on World Cancer Day (Feb. 4), follows the real-life events of Toronto teen, Carley Allison, an up-and-coming figure skater and singer who made medical history with her fight against an extremely rare type of cancer — a malignant melanoma on her trachea. She lost her battle with cancer in 2015 at age 19.

The young teen is played by her real-life best friend and Degrassi: The Next Generation alum Sarah Fisher, and was filmed in and around Toronto.

“We worked with Carley’s family and were able to access locations we couldn’t get into otherwise,” said Cisterna. “We filmed at Bayview Glen where she attended high school, the cricket club where she trained, and we were the first film crew in history to shoot at the Princess Margaret Cancer Centre.”

They got rare permission to shoot on the ice during a live Toronto Maple Leafs game in front of about 18,000 people — somewhere that Allison had performed the national anthem after undergoing a tracheotomy — and even shot some scenes right from the late teen’s bedroom.

Filming there was a privilege, said Cisterna, but also an immense added emotional challenge, given how close to home it hit for the young girl’s family.

“It’s difficult making a film based on a real person, but to do so with Carley’s parents and sisters nearby truly forced us to be truthful, honest and respectful in our storytelling,” he told The Enterprise. “Without the family’s close involvement, the film wouldn’t have had that ‘realism’ that audiences seem to be responding emotionally to.”