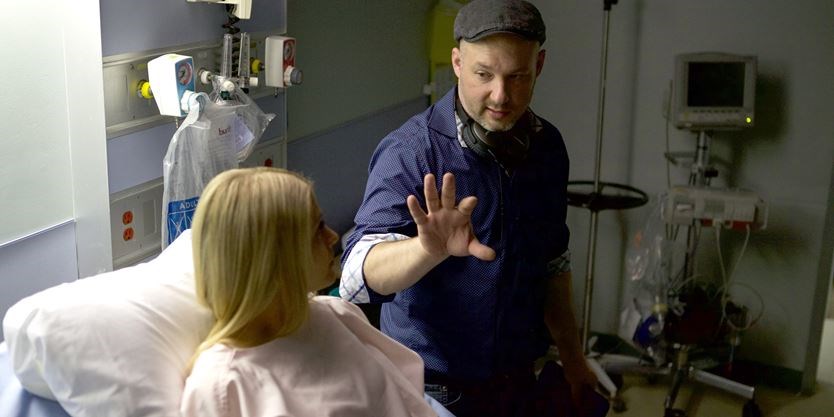 What do you do if you’re a father of three girls and you’re disappointed with the paucity of good female role models on the big screen?

You find one and share it with the world, of course.

At least, you do if you’re Sean Cisterna, a film director who has worked in the industry for more than 15 years.

Next month, the film he created — featuring a real-life role model worthy of his own daughters’ emulation — is being screened in Richmond Hill.

Kiss & Cry is based on the true story of Carley Allison, a promising 18-year-old figure skater and singer who made medical history in her fight against a rare type of throat cancer. She died in 2015.

Cisterna had directed Sarah in Full Out, the story of gymnast Ariana Berlin’s stunning comeback.

“I trusted Sean completely,” Sarah recalls, “so I said to him, ‘I have the best story you’ll ever hear’.”

When Carley was diagnosed with a rare, inoperable cancer, the 17-year-old’s fighting spirit inspired everyone around her. Sarah told Cisterna he should consider making his next film about her good friend.

The more he learned about Carley, Cisterna says, the more he discovered this teenage girl was anything but ordinary.

She was an artist, an athlete, a warm and generous young woman and, above all, he says, she was an optimist.

“It was important that we capture Carley’s lightness. Even when she was fighting the killer inside her, Carley insisted that those around her practised her motto — always smile.”

Scenes were shot in locations meaningful to Carley — her school, skating rinks, the Princess Margaret Centre, at a Leafs game at the Air Canada Centre and, most importantly, her home.

Her real friends appear on screen as extras and occasionally Carley speaks to the camera using Sarah’s own words from the 200-page blog she wrote during her cancer journey.

“She was an outlier — gifted, fearless,” says singer-songwriter Chantal Kreviazuk, who plays Carley’s mom. “There is much to learn from this young woman about never getting stuck in what’s wrong, about remaining engulfed in what’s right.”

Carley’s mother, May Allison, hopes the film will give people the courage to live boldly.

Cisterna, who has a six-year-old daughter and two-year-old twin girls, hopes so too.

“Maybe I’m getting softer as I get older but I want to leave something powerful for my daughters. I wanted to make a movie … that is family-friendly and treats women with respect.”