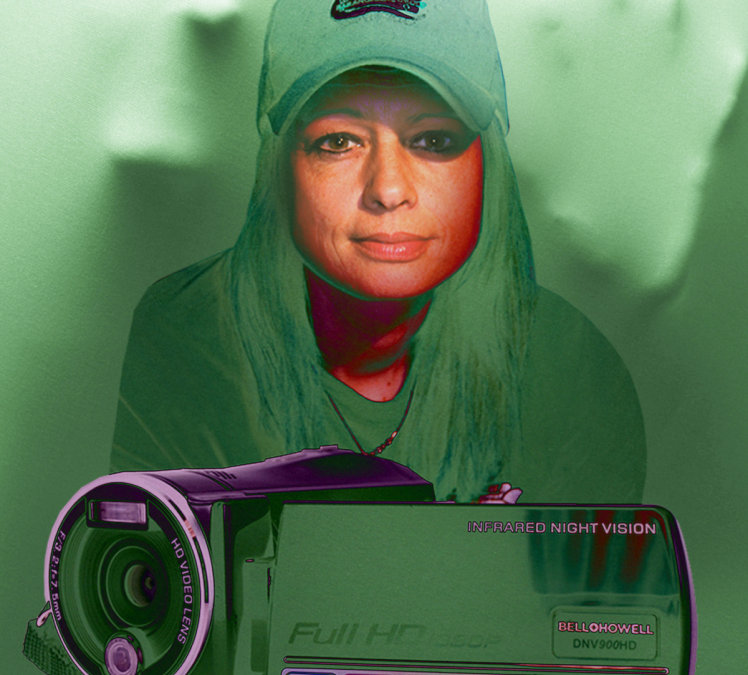 Hey guys! I know you were hoping for two Falling Skies posts in a row, but surely you know me by now! I want to talk about a Canadian independent film I’ve been watching out for.

Yesterday I had the chance to chat with Canadian director and filmmaker Sean Cisterna. His current project is a documentary called “30 Ghosts” which if you keep up with the Facebook Page  for my upcoming new website dedicated to independent and Canadian films, The Road Less Traveled, is a project I’ve had my eye on for a while. So, here is the resulting interview:

Blog: Can you tell us a little bit about 30 Ghosts first off?

SC: Yeah. I was listening to a radio station here in Toronto, and this woman came on and she was trying to get into her local town hall to investigate their proof of spirits or of paranormal activity. I’ve never really encountered a female paranormal investigator before, so that was my initial impetus to reach out to her. Her name is Kim Hadfield, and her group is the Halton Paranormal Group. After I met them and did some research, I quickly found out that she was an eccentric character on a unique life quest, and I really wanted to spend the next year of my life with her.

Blog: How big is her team of paranormal investigators?

SC: There are four lead investigators: There’s Kim, who is the leader of the group. There’s Kimberly, who is I guess a “sensitive”; she can sense activity or spirits of those long gone. Leah is researcher of the group; she’ll research the history of a property or any articles she can dig up in the local library, shedding some light on each investigation. And then there’s Jeff, who does security, sort of protects, goes in and rids abandoned houses of raccoons, that sort of thing. An odd, eclectic group of people.

Blog: So what was the process for filming? Did you just follow them around?

SC: Yeah at the first round of filming, the first month or so, it seemed to get very repetitive. You just show up, investigate, not really catch anything, and because ghost hunts are very boring. Sometimes it was not very compelling. And then we sort of reevaluated things as Kim’s personal life started to unfold before us. Major things sort of happen to her as a person, and that’s when our documentary started to take a different turn. It seems like it’s mimicking sort of an everyman’s quest. Kim is a horse farmer out in rural Ontario, and her farm is in jeopardy but she still devotes as much time and what little finances she can to ghost hunting. It quickly became a chronology of how far one person is willing to go in pursuit of their dream. Which we found to be more intriguing than just following around a bunch of investigators, it was a much more relatable story. How do you balance just following your dream or devoting yourself to being totally responsible, towards your mortgage or that sort of thing? Do we follow these pipe dreams that we have or do we be as responsible as possible?

Blog: A decision I’m sort of facing myself right now.

SC: Same here. I mean, being in the creative industry do I continue living the life of an independent filmmaker, hoping for broadcast sales for every project, or is it time to batten down and find a fulltime job in a non-creative industry? Because the arts are on the chopping block in every sort of municipal and provincial election that we have, the arts seems to be the first thing that gets cut.

Blog: And the new developments with Telefilm moving to support established directors and producers are particularly worrying in that respect.

SC: Yeah…so how do you know about Telefilm…are you Canadian?

Blog: I AM American. But I have spent a lot of time in Canada. One of my big missions is to help increase awareness of Canadian film in America, so I try to keep up with all the news as best I can.

SC: Within the last year or so I joined this organization called PRO, which stands for Producer’s Roundtable of Ontario. If you’re a producer in Ontario, you join this organization. It’s sort of a communal way for all of us to get together every couple months and discuss the changes in the industry and sort of rally together and…I don’t want to say “attack”, but to go after the Telefilms of the industry and get questions answered that sort of thing.

Blog: Right now, from a purely budgetary standpoint, there really aren’t Canadian-made films that can’t be considered “independent films”. So, that makes it a lot easier to have one website dedicated to both Canadian and independent film.

SC: Yeah I can’t think of one [Canadian] project solely funded by one studio I guess you would say. Telefilm is the closest thing we have to a studio system, but it doesn’t compare to the US model.

Blog: Back to “30 Ghosts”, without giving too much away, in the course of filming, did you observe any of this “paranormal phenomena” yourself, or witness anything?

SC: Not live. We tended to have a rule that we would only Kim’s footage as the B-roll for our film. We never went in and put in night-vision cameras or anything. We only used the evidence that they provided. So no, I didn’t personally witness anything that was ghostly. But, they would put in these little audio recorders into these abandoned houses, and hours later you would hear giggling and children’s voices or people speaking, and there’s no one in the house. You could hear the voices as clear as day, and that’s kind of thing I can’t explain. I think I’m more fascinated by the odd audio of this than any behavioral thing on camera.

Blog: Now were you a believer in the paranormal before you made, or not, and has that changed in anyway?

SC: No. Aside from being a fan of ghost movies and things like that, I’m not a believer. I still think I need concrete proof before I put my faith behind something. I’m fascinated that my subjects are so enthralled, by their passion. At the end of the day this isn’t really a film about ghost hunting. It’s one person’s journey to fulfill this dream. Her dream is to prove to the world that ghosts exist. How will she ever be satisfied? I would love to encounter something; I don’t think I ever will in this lifetime. People who devote their lives to their passion, such as Kim, it really makes them fascinating.

I wanted to delve deeper into how she came to this thing in her life. This is a person who has had multiple head injuries, she works on a horse farm and has been kicked a number of times, that sort of medical aspect to her personality. Because of her head injuries she’s on medication, does that have anything to do with where she’s at? What she sees, or thinks she sees?

We set out to make a comedy at first, as much as a documentary can be a comedy. They’re friends who jab each other constantly, all in good fun, and they are quite funny to hang around with. But, once we started filming, and started to learn more about Kim, the documentary took a more somber turn. We showed some footage around someone labeled it a “tragic comedy”. It’s bizarre how real life can alter the plans you have, make a documentary have a totally different feel than what you started out for.

Blog: Now, you’re background in film, is it mostly documentaries?

SC: No, I’ve been working in this industry about 12 years. I did a lot of kid shows to start out. I did a couple of other features, a movie called “Moon Point”. All narrative-based stuff, this is my first documentary.

Blog: Can you give us a brief description of “Moon Point”?

SC: It’s a charming and offbeat little comedy about this guy named Daryl, who is socially awkward. 23-year old who decides to travel hundreds of miles in a red wagon hooked onto the back of his best friend’s electric wheelchair in order to track down a girl he was in love with in elementary school. A very slow road trip to get to these childhood sweetheart who hasn’t seen in years.

Blog: And “Moon Point” is out on DVD now, Correct?

SC: Yes! Anchor Bay Entertainment picked it up, released it a couple months ago. It’s in Walmart(s) across the country [Canada]. We’re extremely happy with that, to be able to get a theatrical release in movie theatres across the country, make our money back in television, tour festivals around the world, what an amazing experience!