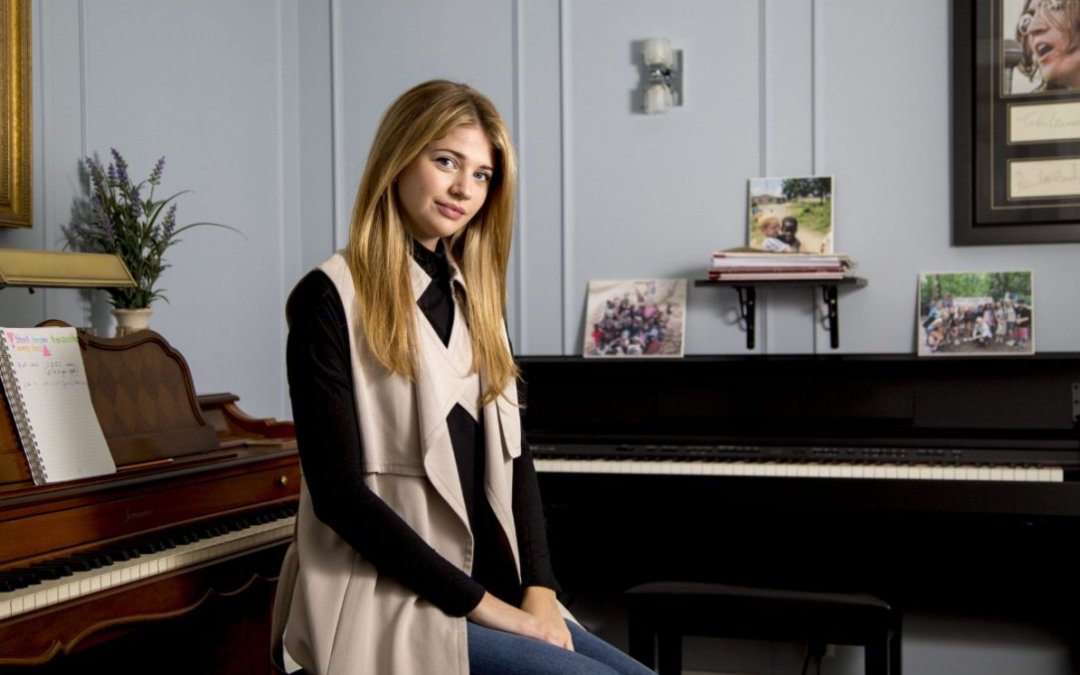 When Sarah Fisher first spotted Carley Allison, the girls were in high school and Allison was onstage at an open mic session, strumming her guitar and belting out a tune.

Allison was petite but had a voice big enough to make Fisher, an aspiring singer herself, watch in awe.

The girls became friends but that awe never faded — not after a cancer that only hits one in every 3.5 billion people started ravaging Allison’s body and she was forced to sing through a tube in her throat; not when chemotherapy meant the pals had to forgo regular trips to Menchie’s to instead cuddle at home; and not when Allison, at age 19, lost her battle in 2015.

So perhaps it’s fitting that Fisher plays her late best friend in Kiss and Cry, a film about Allison’s life and her relationship with her long-term boyfriend.

Fisher stars opposite her Degrassi: The Next Generation co-star Luke Bilyk. Singer Chantal Kreviazuk plays her mother. The movie will open at the Carlton Cinema on Feb. 10, following a national launch on Feb. 4 for World Cancer Day (the Toronto event is already sold out). The debut comes a little under two years after Allison died.

“It was therapeutic to get to tell her story because I lived quite a bit of it with her,” said Fisher. “It didn’t feel like I was playing a character at all.”

That was in part because the team behind the film aimed to make it as real as possible by shooting in the places Allison spent most of her time: Bayview Glen High School, Princess Margaret Cancer Centre, the arena at which she competitively skated, the Air Canada Centre, where she twice sang the national anthem before Toronto Maple Leafs games, and even at her family’s home.

The film cribs lines from Allison’s blog, uses some of her actual clothing as wardrobe, and has cameos from her friends and her beloved dog Tobi.

“To be on her bed, in her room, in her clothes, playing with her dog and telling her story, you can’t get much closer than that,” said Fisher.

It was the Allison family’s idea to give the film crew such extraordinary access to their home and Carley’s possessions but at times, they say, it was tough.

“Sarah came over one day and was playing a song on the piano that Carley had written. I was on the computer and it was a killer. It seemed liked Carley was there and I started to cry,” said Carley’s mother, May Allison. “It was a rollercoaster, but having Sarah play Carley was the best thing for us because we could be honest with her.”

The family felt a bond with Fisher because, despite a two-year age gap, the two teenagers had grown close when their friends went to university. Allison was home singing — and publicly fighting cancer — and Fisher was pursuing music and acting. Mark Allison, Carley’s father, said Fisher was there when he, his daughter and a few of her male pals shaved their heads before Carley lost her hair to chemo.

Fisher included Allison in one of her music videos and made frequent visits to see her at the hospital. At her funeral, she performed a song the duo had been working on together.

“Sarah was there every step of the way and who better to portray her friend than someone who lived that experience with her?” said producer and director Sean Cisterna, who was excited about the project as soon as Fisher pitched it to him.

Cisterna never met Carley Allison, but closely followed the media attention she got after going viral with a video of her singing a One Direction song through a tube inserted in her throat during an emergency tracheotomy.

He knew the video had turned her into a spokesperson for cancer research, making every one of her charity events, medical setbacks and performances headline-worthy.

As a father of three young girls and filmmaker who was always drawn to films with a strong female character, he was eager to get involved with the project.

But before he could start shooting, he had to convince Fisher to play Allison.

“She was quite apprehensive about it, when I suggested it . . . She didn’t want it to be assumed that she would be playing Carley,” said Cisterna. “But after months of conversations with Carley’s family, we all agreed that Sarah was the ideal choice.”

Fisher and Allison’s family are confident Allison would have loved the film because she always embraced the spotlight.

After watching The Fault in Our Stars, a teen drama about two cancer patients who fall in love, Allison had even hinted that her own story could become a movie, her family says, even telling her boyfriend, “Our story is so much better.”

But Kiss and Cry lives up to its name. Some 26 out of 30 people who were at a test screening admitted to reaching for the tissues.

“I’ve seen it twice and I don’t know if I can see it again because it’s very emotional,” says May Allison.

However tough watching it may be, she says she’s still grateful for its impact.

“We lost our child and it’s hard for people to talk to us about that. The movie gave us a venue to be able to talk about Carley and not feel like we are making people uncomfortable,” she says.

But more importantly, May says, the film might inspire someone who is ill or who has suffered a setback to keep fighting, carrying on the message Allison had for so many terminally ill patients.

“It holds on to Carley’s story and it’s there to be seen forever,” she said. “For us, that means a lot.”